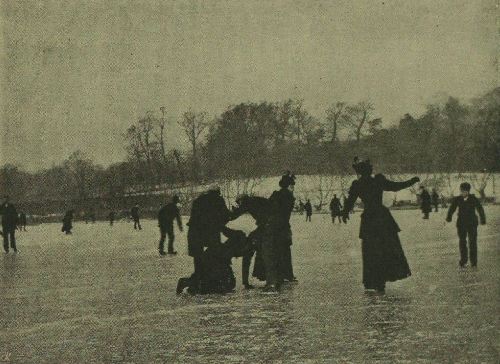 Skating on the Highgate ponds in 1895 (Illustrated London News)

In a fragment of autobiography written by the critic and artist Roger Fry, he recalled that one day in January 1929 he was dozing when he suddenly had a vivid picture of his father ice skating:

It must have been somewhere in the [18]70’s about ’74 1 should guess and the place was one of the ponds in Lord Mansfield’s Park at Kenwood which is now public property but was then very private. Only when the ponds bore, the privileged families of Highgate of which we were one were allowed in by ticket … He [Fry’s father] was passionately fond of skating – it was indeed the only thing approaching to a sport that he cared for … He loved skating indeed so much that though he was a Q.C. in big practice he sometimes managed an afternoon off in the middle of the week so terrified was he of the frost giving before Saturday. It was the only interruption he ever allowed in the routine of his work.

If you were a member of one of the less privileged families of Highgate or its neighbourhood and wanted to skate, a popular place to go was the Highgate ponds, outside Lord Mansfield’s estate. Although these were then part of the estate of the Ecclesiastical Commissioners, and there was no public right of way, people constantly visited them without difficulty, especially when they were covered with ice.

On Saturday 24 January 1885 The Times reported that

The frost which set in on Monday night continues to be severe … So hard was the frost of Tuesday night that, with its continuance since, almost every pond in the suburbs of London, including those of Clapham-common, Hampstead, and Highgate, were frozen over. The ornamental water in St. James’s Park was fully coated with ice; and around the central island in the Regent’s Park lake ice, rather more than an inch thick, has formed … Should the frost keep sharp for two nights more the ice in St. James’s Park will be perfectly fit for skating. Last night at 8 o’clock 4deg. of frost were marked at the Hyde Park Receiving-house [of the Royal Humane Society, founded in 1774 for the recovery of persons apparently drowning], and on the southern shore of the Serpentine thin ice was beginning to form. The most experienced officers of the Royal Humane Society stationed at Hyde Park believed last night that all the atmospheric indications pointed to a continued frost.

Perhaps it was colder on the outskirts of London, or perhaps children were just impatient to get on to the ice. Whatever the reason, on Thursday 22 January 12-year-old Edward Banks had gone sliding on the ice of the Highgate No. 2 Pond – the present-day Men’s Bathing Pond – with two friends. Edward had ventured further towards the centre than the others, and the ice there gave way and he was drowned, his body being recovered only with difficulty and at some risk by a gardener named John Smith.

Despite this, there were people skating on the pond the next day, and at one point on Sunday the 25th there were reckoned to be up to 500 people on this and the two adjacent ponds, though the ice was no more than 2 inches thick, if that, and it gave way on several occasions, causing skaters to be immersed.

By 5 o’clock many people had drifted off to tea, but there were about 150–200 skaters left on No. 2 Pond when there was a sudden crash of breaking ice and, as the Daily News put it, ‘there arose loud shouts, and the skaters, as if impelled by one impulse, swept like lightning on to the banks’ – except for six or seven people who were seen struggling to stay afloat in a hole some 20 yards or so from the shore.

Several people rushed to their assistance. One took off his coat and extended it to a man in the water, who grabbed it and was pulled out. A rope brought from the bank by two skaters proved to be rotten and of little use. A policeman and three others fell in themselves while carrying out rescues. Charles Whyte, the swimming ‘professor’ at King Street baths in Camden Town, went into the water and rescued two people – for which he was later awarded the bronze medal of the Royal Humane Society. And Thomas Simpson, a casual labourer on Thomas Ward’s neighbouring farm, jumped in and managed to bring out one young man. He then went in again to try to rescue someone else, but the bitter cold of the water and the strain of his exertions resulted in he too beginning to struggle and sink. Seeing this, someone on the bank – a Mr Frank Pullen, of Brecknock Road – ran towards the hole, slid to the edge, and plunged in, managing to reach Simpson and, with difficulty, get him on to the ice. Efforts were then made to revive him, but eventually a doctor who had arrived on the scene – William Pepler of Mansfield Road, Gospel Oak – pronounced him dead.

Simpson, who was aged 45 and lived at 6 York Place (probably the terrace of that name in what is now Kentish Town Road) in St Pancras, was a familiar figure thereabouts, and there were many expressions of regret at the death of a good-natured man. It seems likely that he was the same Thomas Simpson whom the 1881 census records as an unmarried agricultural labourer, then aged 40, lodging with a family in nearby Grafton Road.

There was some comment during the evening about the meagreness of the Royal Humane Society’s provision of life-saving equipment in the neighbourhood of the Highgate ponds. The 1879 edition of Dickens’s Dictionary of London noted that the society had drags and life-saving equipment stationed at Ward’s farm; but in the 1884 and 1885 editions the nearest equipment listed was in the police station at what is now the top of Highgate West Hill (no. 49). Police Inspector Goodwin of Y Division told the subsequent inquest that through some misunderstanding the Royal Humane Society had removed the equipment formerly kept at the ponds, and it no longer sent an officer to them when they were covered with ice. But on the day of Simpson’s death a police constable had been stationed there to warn people that the ponds were in a dangerous condition, and the ropes and drags that he had with him from the police station had proved valuable.

Recording verdicts of ‘death by misadventure’ on Banks, Simpson and another man, Francis Annett, whose body was recovered on the Monday morning, the inquest jury, under the direction of the coroner, added a rider that ‘The jurors having heard in evidence that the Highgate ponds are practically open to the public, would recommend that the Royal Humane Society be respectfully requested to consider the subject with the view of establishing at these ponds life-saving apparatus and drags; and that some authorised person should be stationed there to protect the public when ice covers the water.’

When, 14 years later, the stableman William French was drowned while trying to rescue a dog from the Highgate No. 3 Pond, animal lovers had his body buried in a private grave and paid for a handsome monument to be erected over it. Though Simpson’s death was quite widely reported, no such benefactors came forward for him, and on 3 February 1885 he was buried in an area of unmarked common graves in St Pancras Cemetery.

However, in 1908 a tablet bearing his name was unveiled in Postman’s Park in the City of London as part of the Memorial to Heroic Self-Sacrifice, originally conceived of by the artist George Frederic Watts to honour people who died while saving the lives of others and who might otherwise be forgotten: 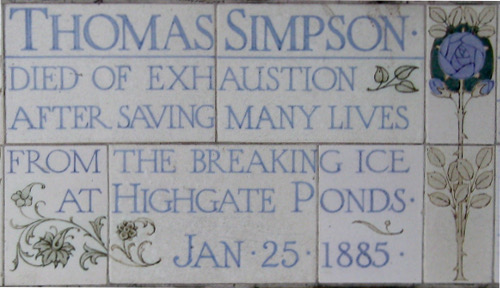