Polly Newbury and Dean Wolstenholme: Music-hall singer and her husband

In January 1892 Percy Charles Courtenay, the husband of one of the greatest music-hall stars, Marie Lloyd, appeared at Bow Street Magistrates’ Court and was found guilty of assaulting his wife. Reports that he had threatened to ‘cut her throat and serve her as Polly Newbury was served’ were perhaps the last appearance in the press of the name of a much less well known music-hall performer.

A few months earlier, at the end of October 1891, Thornton’s Varieties in Leeds had put on a programme including the 29-year-old artiste known professionally as Polly Newbury (sometimes spelled ‘Newberry’). Born Mary Ann Carpenter, she was described in the show’s advertisements as a ‘burlesque actress’ – in those days ‘burlesque’ meant the parodying of well-known serious works, often to risqué effect – though she was usually described as a serio-comic singer and dancer, mixing both tear-jerking and comic material. In January 1890 the show-business paper The Era had described her recent act at the Queen’s Palace of Varieties in Poplar:

A refined and piquant singer is Miss Polly Newbury. Her first two songs, one about a sailor, and the other, ‘Only a tiny portrait,’ which is pathetic and sentimental, are both very pretty. She concludes her turn with a song containing this stirring appeal: – ‘Shout, hip, hooray, For eight hours a day, It’s quite enough in any occupation,’ a sentiment which Miss Newbury’s hearers appeared heartily to endorse.

The Era had first noticed her in December 1883, when it reported that, at Deacon’s Music Hall, near Sadler’s Wells, ‘Miss Polly Newbury’s songs described some of the pleasures of courting, a subject of interest to serio and other ladies; and the possession of a telling voice enabled her to give effect to her selections, with which she seemed to please her listeners.’ In May 1885 it commented that her ‘style is taking and attractive, and [she] knows how to dance,’ and in September 1886 that she had ‘made herself a pronounced favourite’. A year later she was ‘a spirited characteristic vocalist and dances admirably’. At the Phoenix Music Hall in Dover in the summer of 1888 she was ‘frequently recalled’. It was later reported that she was ‘said to possess considerable personal attractions’, and she seems to have been regularly in work and to have been well received, without managing to rise very far up the bill. In November 1890 the London and Provincial Entr’acte noted that, at the Middlesex Music Hall, in Drury Lane, ‘Miss Polly Newbury, after a well-rendered preliminary by the excellent band, takes the stage, and by her lively contributions puts the audience into good humour.’ That seems to have been a regular spot in the programme for her.

A programme for the Empire Variety Theatre in Newcastle, probably from late 1890, showing Polly Newbury as the first act after the overture (by courtesy of Byrnice Reeds and arthurlloyd.co.uk)

While she was appearing at Leeds, her husband, Dean Wolstenholme – known as ‘Fred’ – decided to pay her a surprise visit. Wolstenholme was four years older than his wife, and since he was a boy he had worked as a dresser for the music-hall comedian Herbert Campbell, who in October and November 1891 was appearing in line-ups including Lottie Collins and Albert Chevalier at the Tivoli and the London Pavilion and in 1882 had begun a run of successes in the annual Christmas pantomimes at the Theatre Royal, Drury Lane, which lasted uninterrupted till his death in 1904. 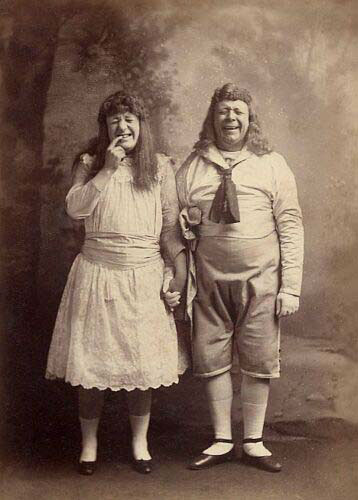 Harry Nicholls (left) and Herbert Campbell as the Babes, Crissy and Bertie, in Babes in the Wood at the Theatre Royal, Drury Lane, in 1888

Wolstenholme and his wife had been married for seven years and had been living amicably together in rented first-floor accommodation at 2 Mylne Street in the Pentonville/Clerkenwell area of London, until he had recently learned that she was having an affair with someone variously known as Lane, Wallace, Walmsley or Courtnay, who was believed to be ‘a gentleman [who] spent his time in visiting music-halls’. Before Wolstenholme discovered the affair, in September all three of them had been staying in Ramsgate, and the two men were described as being very friendly and ‘like brothers’ then.

Wolstenholme was ‘nearly mad’ on finding out was was going on, and was about to start divorce proceedings until he evidently decided on a different course of action and went to Leeds with the intention of shooting his wife there. When he arrived at her lodgings, he was told that ‘Mrs Wolstenholme had gone out with her husband.’ When they returned, Lane took a revolver from him.

Wolstenholme and his wife had returned to London together, and on 6 November Polly had had her widowed mother, Emma Carpenter, send Lane a telegram to break off the relationship. Polly was then advertised to be appearing at the South London Palace of Varieties, in Lambeth.

The Wolstenholmes’ landlady, Mrs Harriet Probart, had found them to be quiet people as a rule, though now and then they ‘would have a few words’, and on the morning of Monday 9 November she heard Polly call her husband ‘a dirty thing’. Later that morning, Mrs Minnie Beavis, the landlady’s sister, called at 2 Mylne Street. She had known the Wolstenholmes for six years, and they had always struck her as being very happy together, but she had not seen them for some six months. It was Mr Wolstenholme who answered the door to her, shortly after 11 o’clock. When she went in she saw Polly, who, coming down the stairs, said , Fred is going to kill me.’ Mrs Beavis asked him, ‘Fred, you wouldn’t kill Polly, would you?’ and he answered ‘No.’ Polly said, ‘I have just burnt some poison,’ and clung to Mrs Beavis and begged her to stay. But Wolstenholme pushed the visitor out of the door, and she then heard four gunshots.

James Currie, who had lodged on an upper floor at Mylne Street since the beginning of the year, heard quarrelling on the stairs and Polly saying ‘Oh, Fred, don’t – ’ followed by two shots. As he hurried down he heard two more shots and reached Wolstenholme just in time to catch him as he fell and a revolver dropped from his hand: he had shot his wife and then put the muzzle of the gun in his mouth and blown his brains out.

Dr Isaac Scarth from nearby Amwell Street was called and found the two bodies lying in the hallway of the house. Wolstenholme, he later told an inquest on 12 November, must have died instantly when a bullet passed through his brain; but Polly, though shot in the head and unable to speak, was still alive, and Scarth had her taken to the Royal Free Hospital in Gray’s Inn Road, where, at about 4 o’clock, she died from her wounds.

Her lover, Lane/Wallace/Walmsley/Courtnay, heard at the hospital that she had died and went distraught to Mylne Street to pass on the news. Mrs Probart – who told the inquest that she had known him visit Polly while Wolstenholme was out, but had never observed any impropriety between them – sent him away. She held him responsible for all that had happened. Mrs Beavis saw him outside the house with his face buried in his hands and exclaiming, ‘My poor girl has gone, and that dirty scoundrel has killed her.’

After a brief discussion, the inquest jury found that Wolstenholme had wilfully murdered his wife and then committed suicide ‘whilst suffering from temporary insanity and mental distress’ on account of his wife’s infidelity.

He and his wife were buried together in a private grave, paid for by Emma Carpenter, in St Pancras Cemetery on 18 November. A large crowd gathered to watch the two hearses followed by two mourning coaches leave the undertaker’s in St John Street Road, with policemen posted to keep the way clear. Many music-hall artistes were present at the grave. No monument was ever erected over it.

The principal sources for the circumstances of the murder/suicide and the preceding events are the witness statements at the inquest into the deaths, as reported (slightly differently) in the Islington Gazette and The Times on 13 November 1891.